This document will inform you about:

Definition and role: what is an API?

An API is an Application Programming Interface. Let's explain each of these terms to better understand: 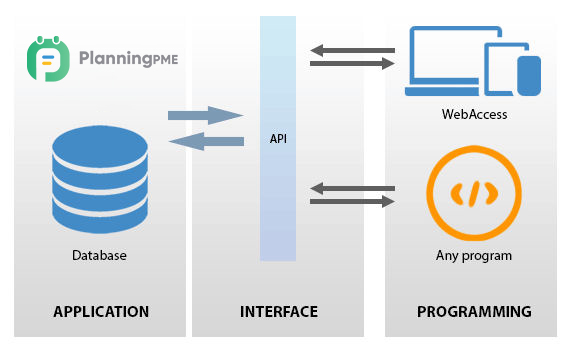 The PlanningPME API is therefore the interface of the PlanningPME application, it plays a major role.
As a mandatory crossing point, it is able to identify accesses, secure transmissions, control the volume of requests, etc

Volumetrics: what are the limits of call to the PlanningPME API?

Each installation of a PlanningPME API has is accessible through a secured key, called AppKey, which authenticates a program (or set of programs) to the API.

By default, the same AppKey has a maximum request volume of 2,000 per hour.
Beyond this limit, the owner of the key will be notified of the overrun, and his plan adjusted according to the following fee schedule.

Ex: my program makes 4,500 requests in less than an hour with the same AppKey, I'm notified by e-mail that my hourly quota has reached the "Micro" slice, and that I will be charged 30 at the end of month.

Above 10,000 requests per hour a prior agreement is mandatory.
Any key that is out of this maximum authorized use quota will be immediately turned off.

Vocation: what are the differences between the standard API and the custom API?

The PlanningPME API has two types of operations.

Standard API allows you to do all basic unit operations on PlanningPME application.

All these operations are described in the interactive documentation.

Custom API allows mass operations to be performed on the PlanningPME application, and one sets up these operations within integration templates.

Ex: I send the updated information of my 25,000 customers to the API, in a single request and in a pre-defined and customized format, the API is responsible for updating customers already in base, add new ones, or even remove obsolete customers.

It is strongly recommended to use the custom API to implement any mass synchronization (type client / resource / project for example), so as not to exceed usage limits of your key. Synchronization using the custom API costs only 1 request, regardless of the number of items updated in this query.

See the documentation of the custom integration API for more details.